Imprint is meeting in person for worship Sundays at 10am.
If you are experiencing COVID symptoms, tune in on Zoom.

A Kingdom Not of This World 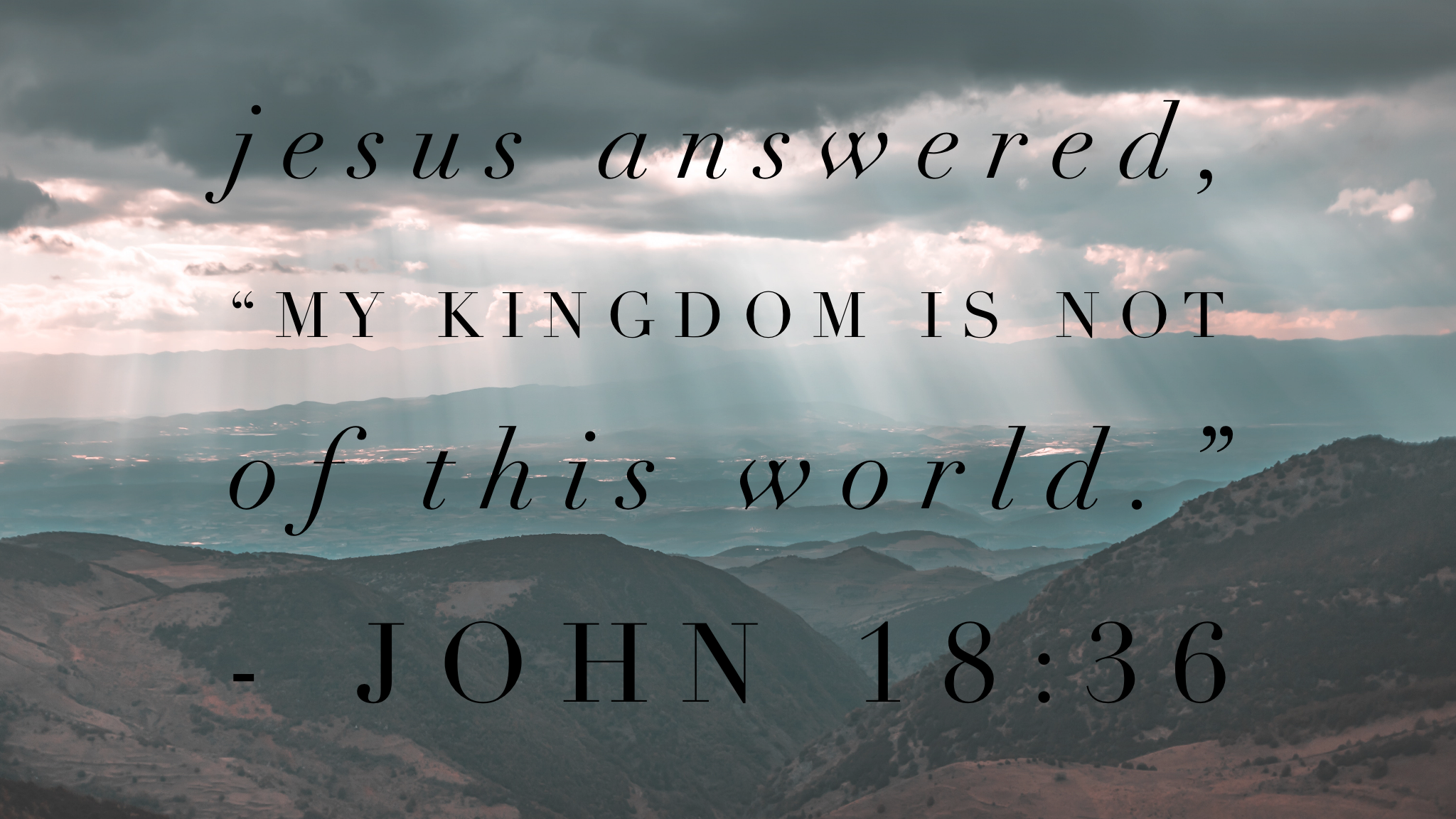 You know the scene. Jesus has been arrested by Jewish authorities, subjected to an unfair trial before the religious council, and now dragged before the highest civil authority to whom they had access, the Roman governor Pontius Pilate. Their goal is to have Jesus executed, but they have a dilemma: “It is not lawful for us to put anyone to death” (John 18:31). So rather than give up their plan to kill him, they just adapt their strategy: Let’s manipulate the Roman government into putting him to death for us.

Pilate thinks this is all a bit overblown, “much ado about nothing,” and does his best to persuade the religious mob outside his office to go a different route. They, of course, won’t have it. So, in a backroom conversation in private, Pilate tries to talk sense into Jesus. Later, in fact, he would petulantly goad him, “Do you not know that I have authority to release you and authority to crucify you” (John 19:10)?

In Pilate’s mind, the answer is simple: If he can simply confirm that this Jesus fellow isn’t a king, then there’s no political reason to execute him. It’s just a religious squabble among the Jewish people. Having heard the moniker “King of the Jews” bandied about, he asks Jesus plainly, “Are you the king of the Jews?” Jesus’ answer doesn’t give him the “out” he was hoping for, and is probably a little confusing to him.

Pilate doesn’t get all the “not of this world” stuff, but he deduces the basic premise of Jesus’ response: “So you are a king?” Jesus doesn’t hold back in his answer: “You say that I am a king. For this purpose I was born and for this purpose I have come into the world – to bear witness to the truth.”

In the economy of Roman imperialism, there can only be one king, one Caesar. So long as Jesus postures himself as a king, he must be dealt with, gotten out of the way. And so the Jewish religious leaders' plan succeeded, and Jesus was “crucified and killed by the hands of lawless men” (Acts 2:23).

If Jesus wanted to be a political revolutionary, he would have recruited and trained a militia. If his goal was to overthrow the Roman government and set up Jewish rule in a geopolitical nation-state of Israel, sedition and mutiny would have been his tactics. That’s the tension that Pilate feels throughout his encounter with Jesus: He claims to be a king – and he’s sure riled up this Jewish crowd – but his tactics don’t make sense. He has no band of soldiers at the ready. He doesn’t use any of the standard political rhetoric of someone making a play for power. In fact, Jesus doesn’t seem like a revolutionary at all!

That’s because he isn’t. And it’s not because his vision of power and glory are too small for an earthly empire – it’s because it’s much bigger than that. In fact, the drama that unfolds in Pilate’s courtyard and on the hill outside Jerusalem, culminating in the execution of Jesus by Roman authorities, rather than snuffing out the potential reign of this would-be king, actually becomes the cornerstone of the inauguration of his kingdom! A kingdom that outshines and outlasts even the greatest dynasties and political powerhouses of this world. Even Rome.

Even the United States of America.

We’re in the throes of a heated, polarized, sensationalized political season, with federal elections just over a month away. If you listen to the political analysts (whether you’re a CNN-type, a Fox-News-type, or neither), or browse Facebook and Twitter, you’ll be asked to regard the upcoming election as the most important event of your lifetime. You’ll be asked to believe that the fate of the nation is at stake. They’ll attempt to persuade you that life as you know it may come to a swift and unpleasant end if the right person doesn’t end up (or remain) in the White House.

Don’t get sucked into the hype machine. Don’t get wrapped up in the political machinations of this earthly nation, as though it is what defines your life. As though it will last. As though the United States – its existence or dissolution – could either solidify or jeopardize the certainty of the eternal Kingdom of Christ.

Even if your worst political fears were to come true; even if every “right” were forcibly stripped away from you – nothing of the riches you’ve been given in Jesus Christ would be shaken or destabilized in the least. The Kingdom inaugurated by Jesus in his death and resurrection, the Kingdom he is bringing to bear upon our broken world, the Kingdom that will one day swallow up all existing national identities and institutions, is not of this world.

Christian, if you’re inclined to worry and despair about the future of the United States, TAKE HEART: Jesus is enthroned in the heavens, and God’s grace has seated you there with him (Eph. 2:6).

If you’re prone to rally, rant, and rage in support of your political affiliation, TAKE HEED: Your citizenship is in heaven (Phil. 3:20), and your most fundamental allegiance is to a Kingdom which far transcends all the kingdoms of this world.

And don’t forget that this Kingdom is established not by sword or by force, but by a cross. Let's help each other keep our eyes there, and our lives in its shadow.

Lessons from the Waiting Room

A Kingdom Not of This World